Last fall, I made a few soups that were unremarkable. There was a carrot, apple, and curry soup topped with extra-sharp cheddar that, while good, was nothing to write home about. I also tried a soup with TVP, cabbage, sweet potato and tomatoes – I thought it was fine, but the kids refused to touch it, and the Engineer was flat-out repulsed by it, although he couldn’t figure out which ingredient it was (he said it tasted bitter to him, so maybe the cabbage?). Anyway, obviously not making that again.

This everyday lentil soup, however, was just what I was looking for! It’s also perfect for the cold weather we’re having right now. It was savory and hearty and just hit all the right notes for me.
There are two types of lentils in here, because the red lentils will dissolve and thicken the broth while the green lentils will hold their shape. The original recipe made 4 servings, but I wanted more, so I changed the proportions a bit – the amounts below are mine. Keep in mind that you can always add more broth to taste, but this was the right consistency for me.
Suggested toppings are parsley and parmesan, but I imagine that this would also be great with feta, or roasted nuts and seeds. You could also serve the soup with crusty bread.
2 Tbsp. extra-virgin olive oil
1 yellow onion
2 large carrots
1 medium sweet potato
2 stalks of celery
3 garlic cloves, minced
½ tsp. sea salt, plus more to taste
½ tsp. lemon pepper (I used black pepper and a splash of lemon juice)
1 tsp. dried Italian herbs
¼ tsp., red pepper flakes, or to taste
¾ cup green or du Puy lentils
¾ cup red lentils
6 cups vegetable or chicken broth
½ tsp. turmeric or coriander
2 Tbsp. lactose-free butter or olive oil (I omitted it)
3 cups roughly chopped kale garnish of choice (see note above), optional
In a large Dutch oven, over medium heat, warm the olive oil. Chop the onion, carrots, sweet potato, and celery into roughly ¼” pieces. Put all the vegetables, including garlic, into the warm pot with the sea salt and sauté until just softened, about 5-6 minutes.
Stir in the lemon pepper, Italian herbs, red pepper, green lentils, and red lentils. Add the broth and stir. Turn the heat to low and cover. Cook for 30 to 40 minutes until everything is tender but not mushy.
Using an immersion blender (or a regular blender), blend up about half of the soup just so it gets thicker (but nowhere close to purées – you still want the texture of the vegetables to come through). Turn off the heat. Stir in the turmeric, butter/oil and kale and stir for the greens to just soften and marry into the soup. Taste for seasoning.
Serve each bowl with a squeeze of lemon and a generous sprinkle of parsley and parmesan. 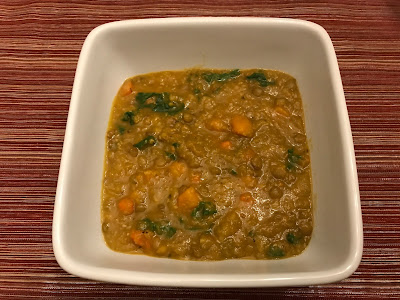 harmoniamacchi said...
This comment has been removed by a blog administrator.
1:20 AM