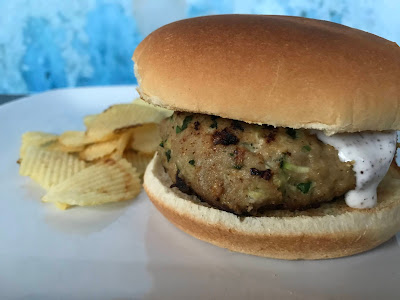 I saw this recipe on Weelicious and decided to make it. I doubled the amounts to have leftovers (though I left the amounts of yogurt sumac sauce as is and had too much sauce even then). I did have some trouble making it, though: the Weelicious recipe called for a large zucchini and no bread crumbs, but when I made it, I realized that it was much too wet with one large zucchini (I didn’t even add the second one) and I had to add 1 cup of breadcrumbs to compensate. After some digging, I found that the original recipe was by Yotam Ottolenghi, who had made it into meatballs. His version specifies a weight of zucchini (200 g), so I’d go with that next time. That being said, the burgers were really good!
For the burgers (4)
1 lb. ground turkey, light or dark meat
1 large zucchini, coarsely grated (see note above)
3 scallions, thinly sliced
1 large egg
2 Tbsp. chopped mint
2 Tbsp. chopped cilantro
2 garlic cloves, minced
1 tsp. ground cumin
1 tsp. kosher salt
4 hamburger buns
For the yogurt sauce (consider halving this)
1 cup lactose-free Greek yogurt
1 tsp. grated lemon zest
1 Tbsp. lemon juice
1 garlic clove, minced
1 Tbsp. olive oil
2 tsp. sumac
½ tsp. kosher salt
In a large bowl, combine first 9 ingredients. Mix well. With dampened hands, form the mixture into burgers about 1 inch thick.
In a large sauté pan or stove top grill over medium, add 1-2 tablespoons olive oil and add the burger patties. Cook burgers 5-6 minutes on each side.
Place all the sauce ingredients in a small bowl and stir to combine.
Place the burgers on buns and top with the yogurt-sumac sauce. (I added a few extra cilantro leaves.) 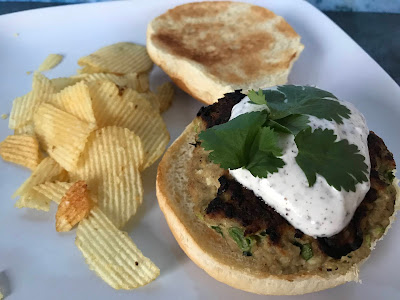 Unknown said...
This comment has been removed by a blog administrator.
2:44 PM