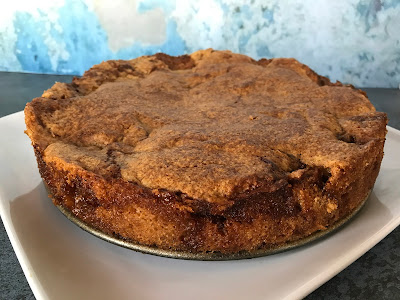 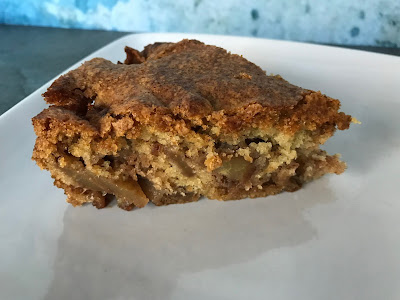 Today is a happy day. You see, there’s this apple cake recipe that the Engineer’s mother makes, and it’s his absolute favorite. His Bubbie made it too. The recipe is in Second Helpings, Please!, and I had both his Bubbie’s annotations and his mother’s tips. But it just wasn’t working! When I had made it the first time (back when we lived in Montreal), I had used 5 apples and had been told that it was too few (when I got my hands on Bubbie’s notes later, she did circle “6” in the “6-8 apples” called for). It was supposed to be made in a 9” square glass dish, but that’s not a standard size and I couldn’t find a pan that size. Last fall, I tried a 9” springform pan (which has a comparable volume) and used 5 apples again, which I weighed (roughly 250 g on average), but it was definitely too *many*.
Eventually, my mother-in-law admitted that she uses fewer apples and was now using a different kind of pan anyway. So I tried again, still with my 9” springform, this time with 1 ½ (large) Envy apples. AND IT WORKED! I finally have the cake I want from this recipe, and the Engineer has approved my version. So here is our apple cake, heavily adapted from Second Helpings, Please! by three generations. I’m simply writing down a weight of apples below and you can adjust the number depending on their size.
1 ½ cups (180 g) all-purpose flour
2 tsp. baking powder
½ tsp. baking soda
¼ tsp. salt
550 g apples (see note above), pared and thinly sliced
½ cup brown sugar
2 tsp. cinnamon
2 eggs
1 cup granulated sugar
1 tsp. vanilla
½ cup vegetable oil
3 Tbsp. water
Preheat the oven to 350 °F. Grease a 9” springform pan.
In a small bowl, whisk together the flour, baking powder, baking soda, and salt. Set aside.
In another bowl, stir together the apples with the brown sugar and the cinnamon. Set aside.
Beat eggs, granulated sugar, and vanilla until fluffy. Beat in oil. Add half of dry ingredients, then water, then the rest of the liquid ingredients, beating after each addition until just smooth.
Spoon half of batter into the prepared pan. Gently top with the apples, spreading them evenly, then top with the rest of the batter.
Bake for 50-60 minutes, until nicely browned and a toothpick inserted in the middle comes out free of batter. 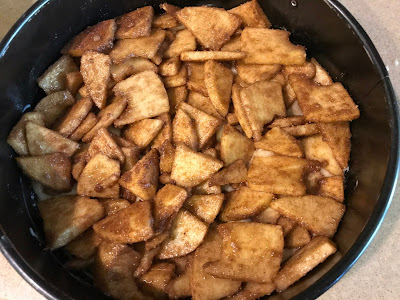 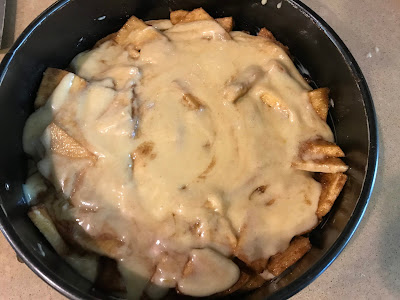 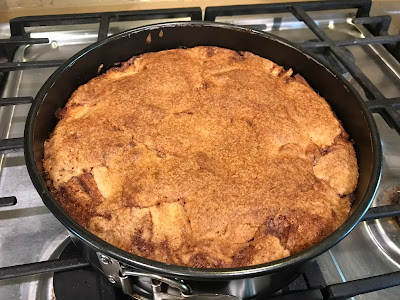 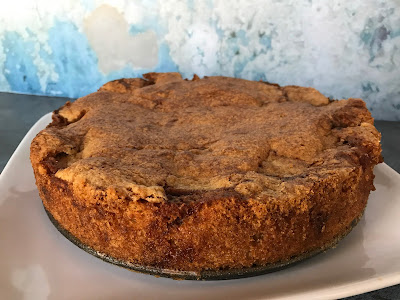 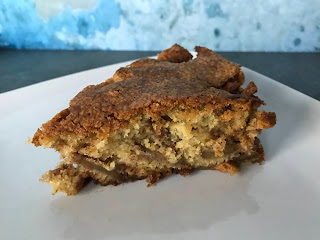