I knew I had to make these meatballs after I saw them on Deb Perelman’s column on Bon Appétit (recipe here). The big draw was supposed to be the ketchup in the sauce, but honestly, we found the sauce much too spicy! There was definitely too much ginger. Maybe I should cut back on the mirin and Worcestershire sauce too? Only as I was typing this recipe did I realize what the mistake might have been: the list of ingredients said “1 ½” piece ginger” and I thought it meant one piece of ginger that was 1 ½” long, but looking at the ingredients for the meatballs, those say “1 2” piece ginger”, which logically means that the sauce actually called for one piece of ginger that was ½” long. I guess this is where it pays off to use hyphens properly and not abbreviate to the point of confusion… Anyway, I corrected it below and it should be fine!

Since I wanted to make sure I had leftovers, I doubled the quantities for the meatballs, though admittedly my baking sheet was overcrowded and I should have used two. I also omitted the broccoli stems, since we’re not such huge fans over here, but roasting broccoli is a pretty good way to eat it. I think that next time, with a proper amount of ginger in the sauce, it’ll go over better! I started with 1 ½ cups of dry jasmati rice to make a side, because that’s typically a good amount for us (2 meals for 2 adults and 2 kids). I’ll definitely be making this again, with a less spicy sauce!
For the sauce (see note above)
2/3 cup ketchup
¼ cup Worcestershire sauce
2 Tbsp. rice cooking wine or water
2 Tbsp. honey
4 tsp. soy sauce
½” piece ginger, peeled and finely grated
½ tsp. freshly ground black pepper
For the meatballs (see note above) and assembly
2 heads broccoli (about 1 ½ lbs.)
2 Tbsp. vegetable oil, divided
2 ½ tsp. kosher salt
crushed red pepper flakes (optional; I used a pinch of Korean pepper)
1 lb. ground chicken
1 large egg, beaten to blend
4 scallions, thinly sliced
2 garlic cloves, finely grated
2” piece of ginger, peeled and finely grated
½ cup panko (Japanese breadcrumbs)
1 Tbsp. toasted sesame oil
¼ tsp. freshly ground black pepper
¼ cup water cooked rice and sesame seeds, for serving
For the sauce
Mix ketchup, Worcestershire sauce, wine (if using), honey, soy sauce, ginger, and pepper in a small saucepan. Measure out ¼ cup mixture into a small bowl; set aside for glazing meatballs later. Bring remaining mixture to a simmer over medium-high heat, stirring occasionally and reducing heat if needed, until sauce thickens, about 5 minutes. Transfer sauce to a small bowl.
For the meatballs and assembly
Place a rack in upper third of oven; preheat to 450 °F. Line a rimmed baking sheet (or two, if doubling the recipe) with foil. Trim broccoli stems and remove from crown. Peel off tough outer skin; slice crosswise into ½" pieces. Cut florets into 2" pieces. Toss on prepared baking sheet with 1 Tbsp. vegetable oil, 1 tsp. salt, and a few pinches of red pepper flakes (if using). Push to the edges of baking sheet to create a space for meatballs. Brush space with remaining 1 Tbsp. vegetable oil.
Mix chicken, egg, scallions, garlic, ginger, panko, sesame oil, pepper, remaining 1½ tsp. salt, and water in a medium bowl. Using wet hands, form into twelve 1½"-diameter meatballs (I made mine smaller). Arrange on baking sheet; brush with some of the reserved glazing mixture. Bake until meatballs are cooked through, 14–18 minutes (15 minutes in my case). Remove from oven; heat broiler. Brush meatballs with remaining glazing mixture; broil until broccoli is charred and meatballs are browned in spots, about 5 minutes.
Spoon meatballs and broccoli over rice in bowl. Drizzle with sauce and sprinkle with sesame seeds. 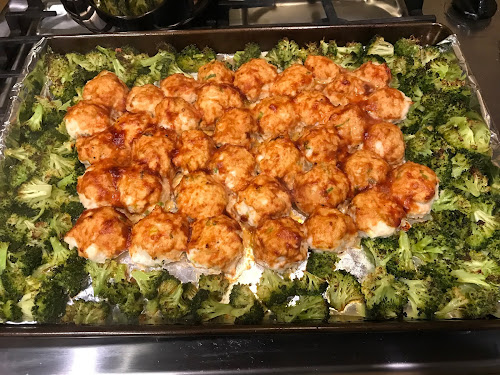 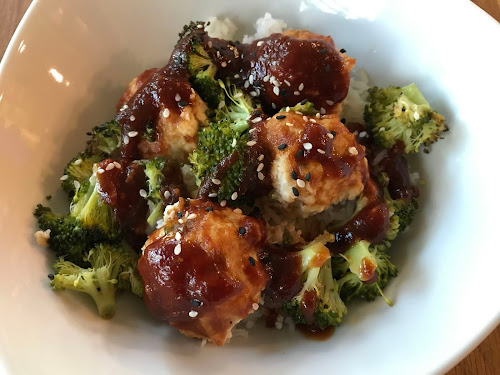