I saw this video tweet by Jamie Oliver in which he makes a really easy deep-dish pizza right in a pan, so when I had some leftover sausage crumbles to use up, I figured this was the right thing to do with them. The recipe is here, though I adapted some ingredients to what I had on hand – pandemic cooking and all. I didn’t have self-rising flour, so I added baking powder and am giving you the proper amounts below. That being said, I also used bread flour instead of all-purpose flour, and I think that was a mistake because the crust was too thick and chewy for us – but that’s on me! I liked this pizza, but my kids were disappointed that there was no red sauce, so next time I’ll try to add some. This is a great recipe to use up leftover meat, cheese and vegetables!
2 Cumberland sausages (I used sausage crumbles)
olive oil
1 pinch of dried oregano
½ tsp. fennel seeds (I didn’t use them)
2 red onions
500 g self-rising flour (or 2 Tbsp. baking powder + top up to 500 g with all-purpose flour), plus extra for dusting
100 g cheddar cheese
Preheat the oven to 475 °F. Put a large non-stick, ovenproof frying pan on a medium-high heat.
Squeeze the sausage meat out of the skins directly into the frying pan, with ½ a tablespoon of olive oil. Use a wooden spoon to roughly break up the meat. Add the oregano and fennel seeds, and stir-fry until the sausage meat is lightly golden.
Peel and finely slice the onions, then add to the pan with a pinch of sea salt and black pepper. Cook on a medium heat for 5 to 10 minutes, or until the onions are soft and caramelized, stirring regularly. (Mine did not end up caramelized after so little time, obviously, but they were still good.)
Meanwhile, for the dough, pile the flour into a bowl with a good pinch of sea salt. Add up to 1 cup of water, mixing until it comes together as a smooth, elastic dough (I added a tad more); you want it to be pliable.
Knead the dough on a lightly floured surface for a couple of minutes, then form into a rough round.
Now, tip your topping out of the pan for a moment, returning the pan to a medium heat. Place the dough in the pan and – being careful not to touch the hot pan – use your fingertips to stretch out the dough to cover the base (I rolled it out over a lightly floured countertop first so that it was about the same size already).
Spoon the toppings back over the pizza, spreading it out and pushing the sausage into the dough, then top with the grated cheese.
Turn the heat back up to medium-high and cook for 3 to 5 minutes, or until the base has started to crisp up. Transfer to the oven for 10 minutes, or until golden, puffed up and sizzling. Serve with a nice salad, if you like. 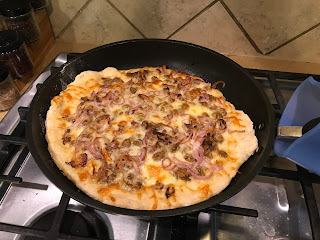 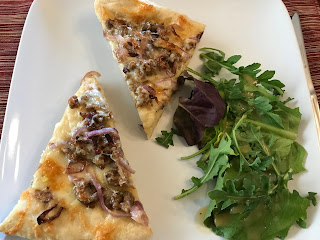