This dish was created by Deb Perelman for Bon Appétit. In her column, she admits that if she were to just call this “warm winter vegetable salad with halloumi”, it would not be appealing to kids. But pita chip salad? It certainly worked to bring my kids to the table! I had also been meaning to try halloumi cheese for a long time, and when I found some at the store, I confirmed that it had 0 g of sugar (just check the nutrition label, because some brands might be a bit different), which means it is lactose-free. Hurrah! Halloumi grills beautifully, though I didn’t leave it in the oven quite long enough (I didn’t want to risk charring the vegetables or making the pita too crisp). Maybe I should have set the oven to broil instead of just letting it bake longer? Anyway, I liked halloumi. It was salty, and much squeakier than I had expected.

I had decided to increase the quantities of this dish to have enough for two nights, but in hindsight, I should have left them as is. It’s best eaten the-night-of, though it reheats well in the oven (20 minutes at 350 °F did the trick for me). The amounts below should make 4 servings, but keep in mind that kids might eat less. Don’t hesitate to bulk it up with pita or with a vegetable that you know your kids like. I didn’t split my pita into 2 layers because it was absolutely impossible to do without tearing it apart completely; I had 5 medium rounds of pita bread instead of 1 large one, which felt like just enough for my increased quantities (i.e., most of a smallish cabbage, ¾ of a squash, and 16 oz. of halloumi, all on 2 baking sheets instead of 1).

Preheat oven to 425 °F. Coat a rimmed baking sheet with 1 tablespoon oil (I also lined it with parchment paper).

Mix garlic, salt, Aleppo pepper, and 3 tablespoons oil in a large bowl. Add cabbage, onion, and squash and toss to coat. Spread out n prepared baking sheet (keep the bowl handy) and roast until squash is browned underneath, 25-30 minutes (I flipped them over at the 15-minute mark).

Toss pita, halloumi, and remaining tablespoon of oil in the reserved bowl. Scatter over vegetables, then turn vegetables over with a large spatula. Roast until squash is fork-tender and cabbage, onion, pita, and halloumi are browned in spots (cheese should be soft inside), 15-20 minutes (I only left them in for 10 minutes, so perhaps a bit longer would have been better). Remove from oven and drizzle with cider vinegar. Top with sumac and mint. 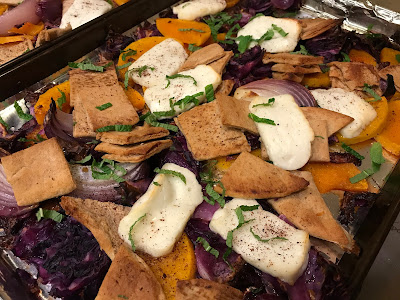