On our way back to San Antonio, we stopped at Dinosaur Valley State Park, near Glen Rose, Texas. The first dinosaur tracks were discovered there by (white) locals in 1909, near the Paluxy River. Initially there was a theropod track, and not long after, the first sauropod tracks ever were found. They became famous when Roland T. Bird journeyed there to search for more tracks in 1937. Apparently, it’s thanks to those tracks that scientists now know that sauropods were land-based animals – up to that point, they thought that sauropods had relied on water to support their bodies. The tracks also showed that sauropods were herd animals who cared for their young and that they moved more slowly than their therapod predators. Because of all the data in these tracks, the park was designated a National Natural Landmark.

So, things to know before you go: the level of the Paluxy River varies wildly, so tracks are often submerged and trails might be closed. Check their status on the park’s Facebook page or its Twitter page before you go. Late summer is typically a good time to visit, as the weather tends to be dry. But that brings me to the second point: it can be very hot (it was about 105 °F when we visited), so bring plenty of water and sunscreen. There is also a lot of wildlife (including the biggest harvestman spider I had ever seen, in the women’s restroom), some of which might be dangerous, so stay on the trails.

It was only once we were there that we realized how steep and rugged the trails are in some areas, and since we were there with small children, this was not a good combination. Also, even when the water is low, you cannot access any of the tracks without getting wet (I had planned ahead, but not the Engineer). What I most wanted to see was the ballroom track site (map here), because it’s the one that has the most tracks, and the low water levels meant it was the best time to see it. We followed directions, using both the paper map provided by the park and the posts indicating which trail to follow. And you know what? We never even found the site. What I know is that you’re supposed to cross the river to see it, but there was no indication of where “it” was, and access to the river was limited and slippery (again, steep and rugged trails, plus two little kids). The map has exact coordinates with degrees north and west, but I had no way to figure out how to use that information, and no cell service to help me figure it out. So that was a big disappointment, and we had to turn back once we reached what looked like a camping site (indicating that we had gone too far anyway). 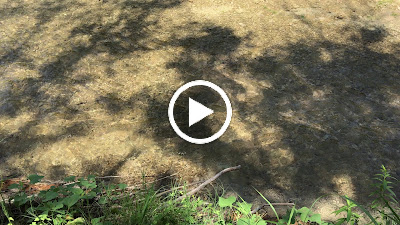 On the way back to the parking lot, we stopped by the blue hole site. A lot of people were swimming, and as it turns out, the water was absolutely perfect (clear water at a most pleasant temperature, so plan to bring swimsuits and towels if at all possible). There is one track there that was visible from the trail high up on the bank, but I really wanted to get closer. So I left the guys on the high bank, walked down to the river (passing an adorable lizard on the way, possibly a Laredo striped whiptail), left my backpack on the rocks, and waded in. I had to be really careful not to fall in, leaning far over the rock when the ledge almost disappeared, but I made it to the track! FYI, I had water up to my knees at its highest point. This would not have been a big deal had I been in my swimsuit, but I wasn’t, and I had my phone in my pocket, so I really didn’t want to fall in! The water was super pleasant, though. 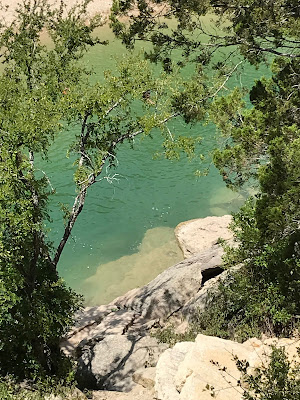 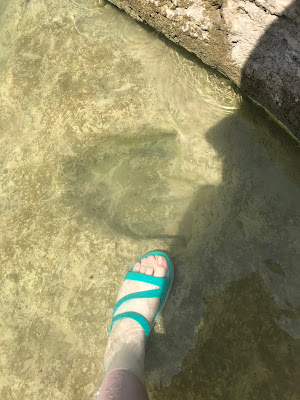 From there, we got back in the car and drove to the main site – if you want the “easy” version of this outing, that’s where you should go. There are steps right off the parking lot going down to the river, where you can cross by carefully making your way over large rocks (but you will definitely get your feet wet). There are tracks clearly marked on the other side. The picture below overlooks that location, and you can compare it to this video to see why it’s important to check the river level before going! 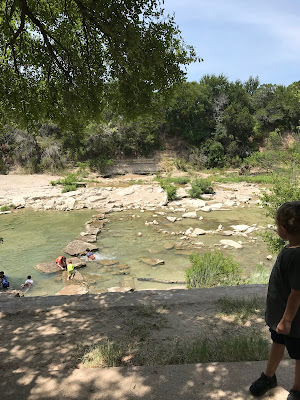 And here are the tracks, belonging to Cretaceous sauropods and therapods (as best we know, they were Sauroposeidon and Acrocanthosaurus, respectively). Those are observable, but you can’t actually go touch them. 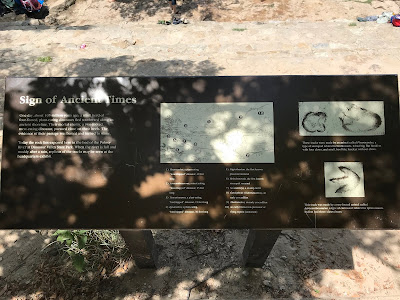 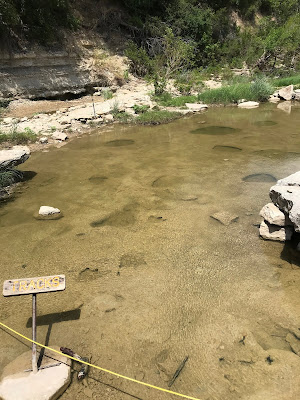 After that, we went to have lunch someplace with air conditioning, and drove the rest of the way home using Highway 281 all the way, and we found it so much more pleasant than the I-35 that we may never use the latter again.