I made two kinds of cupcakes recently. One was very pretty: chocolate cupcakes with blood orange glaze. But they weren’t that different from what I usually make, so I’ve decided it doesn’t warrant its own post. 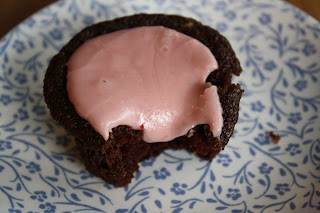 The other recipe, Paleo pink velvet cupcakes from Civilized Caveman Cooking, made less than photogenic cupcakes in my case. There was originally a maple vanilla frosting, but when I made it, it was a complete disaster and was nothing like the pictures in the original post, so I’m not sharing that recipe (and pardon the unappetizing photo). The cupcakes themselves, however, were surprisingly good! I’d definitely make that recipe again, just with another frosting.

Note that this recipes makes 10 cupcakes, not the typical 12.

Preheat oven to 350 °F. Prepare a muffin pan by lining 10 of the wells with paper liners.

In a stand mixer or large bowl, mix together coconut oil, maple syrup, eggs and vanilla extract. Slowly mix the dry mixture into the wet mixture, ¼ cup at a time, until well mixed. (I think that since there’s no gluten in this, you can’t really overmix.)

Scoop the batter into the prepared muffin tin, filling each well 2/3 of the way. Place in the oven and bake for 18-20 minutes or until cooked through (a toothpick inserted in the center should come out clean). Let cool to room temperature. 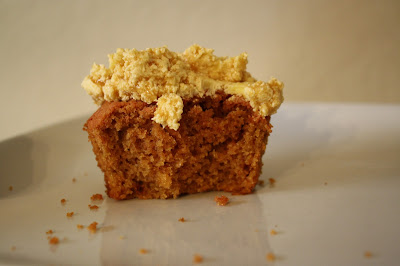