We’re now adapting to our new routine, with the Engineer being back to work and the Little Prince being back to (part-time) daycare and the Fox and I trying to figure out a good napping schedule (for him, not for me). We got really lucky because Hurricane Harvey avoided us entirely (going so far as to circle the beltway, even), so everything is fine for us here. People overreacted and bought all the water at the grocery store (doesn’t affect us) and all the gas at the station (we do need to fill up before next week), but we only had a few days of rain, so we really can’t complain. If you want to make a donation to help the people who *were* affected, you can do so here or here, for example.

This post is about our summer travels to Quebec. We had some personal highlights this year, including the wedding of the Actor and the Leading Lady (for whose reception I baked 6 dozen chocolate chip cookies – their dessert table was a potluck buffet of dishes made by guests, and it was AWESOME). We also had days of perfect alfresco lunches and dinners with loved ones we don’t get to see nearly often enough. 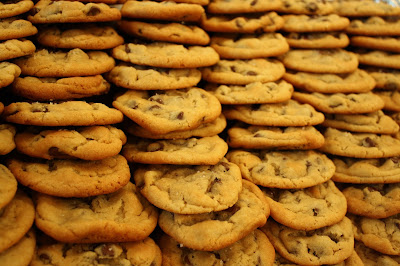 We made the time to try various restaurants that were on my list. First, there was Épicerie Hào, which makes some amazing pork buns. The Engineer actually said that every other establishment can just stop trying, because they’re never going to top these! An order of 2 buns will run you $9.50 plus tax; be aware that the place is very small and, while there is a counter with a few seats (where you will get glasses of water and chopsticks), you might be better off treating it as a grab-and-go place. There are also vegetarian buns and sometimes a salad and dessert, but that’s it. We loved it! 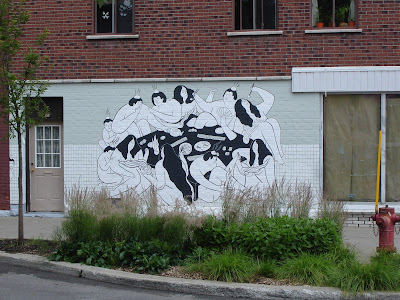 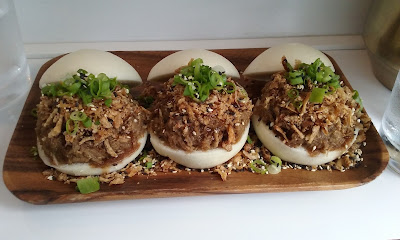 We then tried Café dei Campi, where I wanted to go because I’d heard that they make vegan cannolis. Well, it turns out they only make them twice a year (and not at fixed dates; the waiter couldn’t even tell me whether they’d have them again before Christmas). However, EVERYTHING there is vegan, so it was still a place that made me super happy! We ate two strawberry tartlets with oat cream along with some donut holes, and they were delicious. The fauxtella-stuffed donuts looked fantastic, but the woman ahead of me in line took the last one and once something’s gone, it’s gone. The place is small, but there’s a comfortable bench out front and a park where you can eat your treats to go. (They also serve what I’m told is great coffee, along with lunch dishes like pizza and quiche.) I’d love to go back for more pastries! (I now realize that some of them might also be sold at Gusta Foods at the Jean Talon Market, if you’re in the area.) 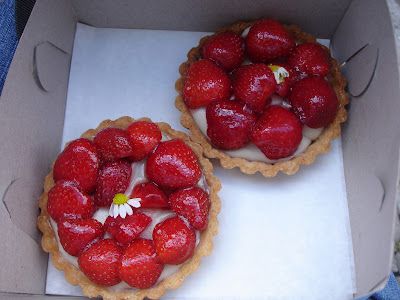 We also went to Hoche Glacé, which sells vegan soft-serve ice cream. And it was fantastic. Admittedly, I was hoping for one of their seasonal flavors like beet-raspberry, but it was carrot cake, so I opted for a plain vanilla soft-serve dipped in dark chocolate, and I loved it. I tasted the soy a bit, but didn’t mind it all that much. It turns out that they also sell vegan blizzards and various other treats, so I’ll try one of those next time! There’s plenty there too for non-vegans. Plus, they made the yard into a very inviting terrasse, so it’s nice to linger a bit. I hope to go back, even though it’s out of the way for us. 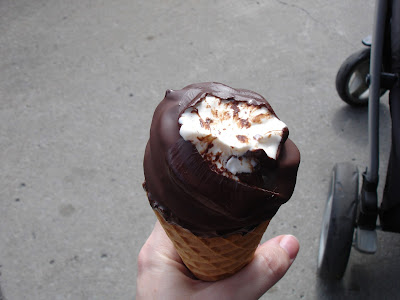 We went to a location of Copper Branch, a vegan fast food place whose menu looked really good. Sadly, the food (and smoothie) did not live up to our expectations at all, plus the kitchen made a mistake with my order and was then rude about fixing it. So we hightailed it to Juliette & Chocolat for dessert. I had the vegan brownie, which is excellent, albeit a little too sweet; the Engineer had the brownie kebab for variety. There’s also an iced pop that’s vegan, so that’s two dessert menu items I could have, but when I went a second time that month I ended up ordering the dark chocolate raspberry dome (along with a LactoJoy), and it was *so* good. My dream gig right now would be consultant, to expand their lactose-free options on the menu!

We had a great lunch at La Belle et la Boeuf, which turned out to be super kid-friendly. They make awesome burgers – we’d love to go back and explore the menu! For what it’s worth, their poké bowls also look delicious, but we weren’t there for a poké bowl. I had the Beauty, which contains brie, monterey jack, homemade fig jelly, arugula and caramelized onions. Divine! The fries were perfect, too. And if you’re a fan, they’ve got pink Kool-Aid pickles!

And then there was poutine. The Engineer and I always say that it’s an “annual” treat for us, but the truth is that it had been years since our last proper poutine, and I was really, really craving it. I started by having one of the worse ones of my life at a restaurant I shall not name (I had forgotten that even in Quebec, poutine isn’t automatically good); it was so bad that I don’t even count it. I then had an excellent one at La Banquise; since I wanted the real thing, I didn’t try their vegan version and just used some LactoJoy. The only odd thing was that the cheese curds were the same size and shape as the fries, which was unexpected. But then, THEN, I had a poutine good enough to make the angels sing, at the Big Orange. It was textbook perfect, with home-style fries, curds just hot enough to be slightly melted while retaining some squeakiness, and the perfect fry/cheese/sauce ratio. The memory of that poutine will have to keep me warm until next year! Again, a single LactoJoy took care of the poutine AND the Orange Julep. That was by far one of the best meals of the summer! Sadly, the Little Prince categorically refused to even taste poutine. We didn’t want to force him, but at the same time, I’m sure there will come a day when he’s a teenager and will regret not taking advantage of this opportunity! We’ll just remind him that that’s why we think he should taste new foods before deciding whether or not he likes them. He did, however, agree to try a beaver tail (his first!), and he really enjoyed it. 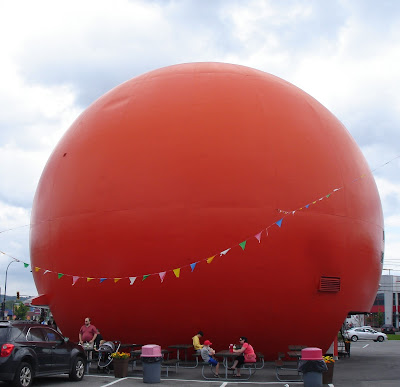 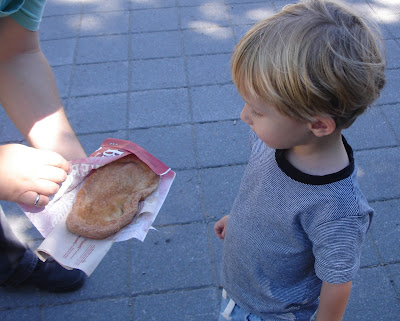 Finally, I want to talk about the Aquarium du Québec. It’s been there for over 50 years, but somehow we had never been. The location is fantastic, right on the banks of the Saint Lawrence River. There are three distinct pavilions, plus beautifully manicured gardens in between. The Aquarium houses marine mammals like seals, walruses and polar bears; a whole bunch of saltwater and freshwater fish; rays that you can touch; plus the perfunctory jellyfish, starfish and seahorses. And sea dragons! I have to admit that every time I see a seahorse or sea dragon, I’m reminded of how much I like them, even if I seem to forget in-between sightings. There are also picnic areas, cafeterias, a playground, a tree-to-tree pathway built for kids (let me know if you can think of a good translation for “hébertisme”), a splash pad, and free parking. One of the buildings also has a lactation room, and it was my first time using one – I really appreciated the comfort and privacy, but would point out that it was essentially a hot house on that day in late July! The Aquarium also gives out free strollers and wheelchairs, which is great, though one of the pavilions is not stroller-accessible so we had to split up and take turns visiting it, and there’s one section that I didn’t get to see because the stroller-friendly path didn’t take me there (the Engineer and Little Prince saw it, unbeknownst to me, while I was breastfeeding). We really enjoyed our visit! Lastly, to seal the deal: the admission price is *excellent* if I compare it to what they charge either at the San Antonio Aquarium (which basically charges the same but has much, much less to offer) or the New England Aquarium (about twice the price, but not twice the sights). 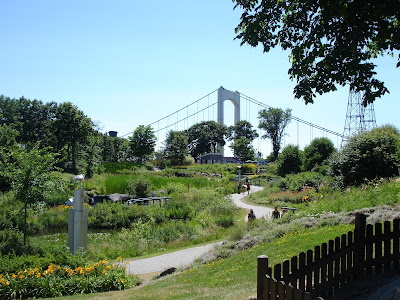 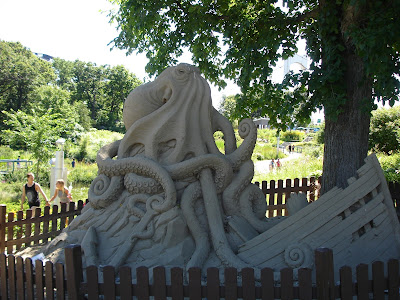 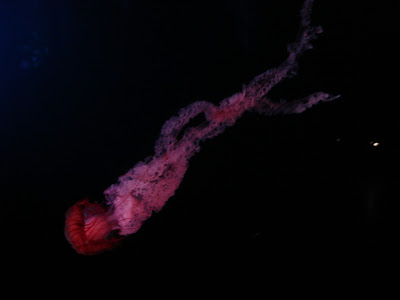 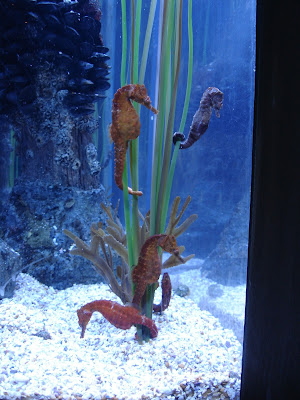 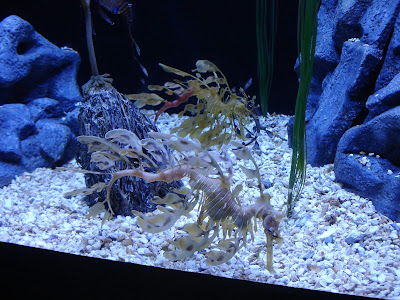 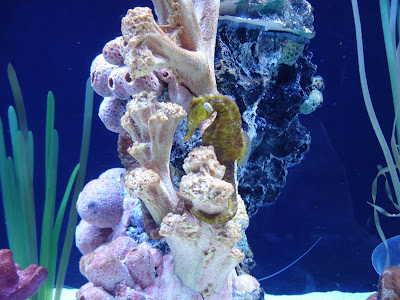