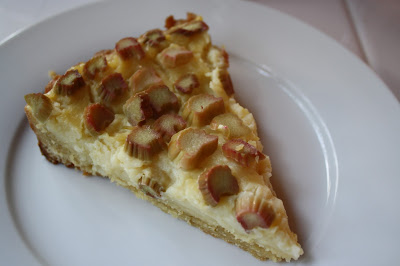 I made two rhubarb tarts last summer. The first was a recipe that I found on the Spanish version of Elle (and you should go see the gorgeous tart on that post!), while the second, from Cannelle et Vanille, included strawberries, vanilla bean and orange blossom water (though I confess that because I didn’t want to fill my mother’s pantry with leftover ingredients, instead of the gluten-free crust I just made the one from this tart again). As it turns out, I had higher hopes for the second tart, but it disappointed me. If you try it, I recommend cutting the rhubarb into ½” pieces instead of 3”, and increasing the orange blossom water to 2 teaspoons because as it was, I couldn’t even taste it. Don’t get me wrong, it was good, but it was the same style as the first one, and realistically I’m only going to keep one recipe for rhubarb tart! 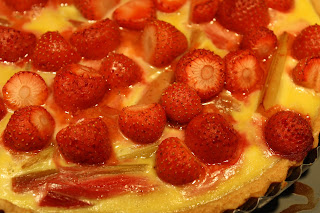 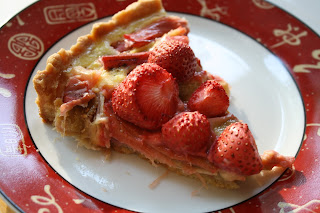 So here it is, the recipe from Elle, with my notes and translation. (Google Translate helped, but I had to revise the text because with gems such as “We booked it” to translate “Reservamos” – instead of the correct “Set aside” – it was both incomprehensible and hilarious!) I made this with rhubarb from my grandmother’s garden (set aside before making shortcakes), which was bright green instead of the beautiful pink shade in the original blog post – plus, I didn’t slice the stalks paper-thin like they did because there’s only so much time I’m willing to spend on decorating the top of a tart; YMMV. I did find pinker stalks later at Jean Talon Market, which I used for the second tart as well as scones (post coming soon). This tart was really great, though. I made the crust with Natrel’s lactose-free butter, and it was so, so good!

For the rhubarb topping
3 stalks of rhubarb
4 Tbsp. sugar

For the tart crust
In a food processor, mix the flour, confectioners’ sugar, ground almonds and salt. Add the butter and vanilla and process until the mixture is uniform, then add the egg yolks and process again until the mixture is uniform and the dough just starts to come together (it will be soft and a bit clumpy at this point; do not overwork). Pat the dough in the shape of a disc, wrap it in plastic and refrigerate it for about 30 minutes.

Lightly grease a 9-inch tart pan with removable bottom (this is easier with a spray, given the nooks and crannies of a tart pan). Let the dough come to room temperature for a few minutes before proceeding.

On a lightly floured surface, roll out the dough and transfer it to the prepared pan. Refrigerate another 30 minutes.

Preheat the oven to 350 °F. Prick the dough with the tines of a fork and blind bake it for about 20 minutes (I always do this by using pie weights set on a sheet of aluminum foil).

For the rhubarb topping
Cut the rhubarb into thin slices (see note above) and mix it with the sugar. Let macerate and proceed with the rest of the recipe.

Remove from heat and transfer to a bowl to let cool, then cover the surface with plastic wrap and refrigerate (this will prevent a skin from forming).

For the syrup
Mix all the ingredients in a saucepan and heat until the sugar has dissolved and the mixture has thickened slightly.

To assemble and bake
Preheat the oven to 400 °F. Fill the reserved tart crust with pastry cream, top with the rhubarb (arranging it as you see fi; see note above) and bake for 20 minutes.

Once the tart is ready, brush it with syrup to give it a bit more shine and serve. 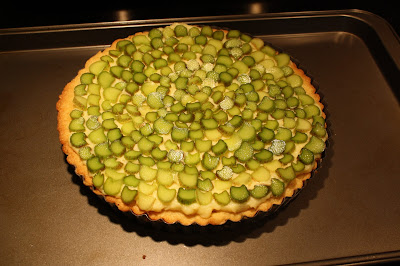 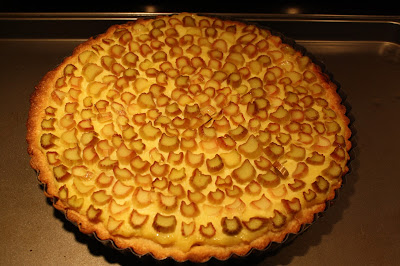 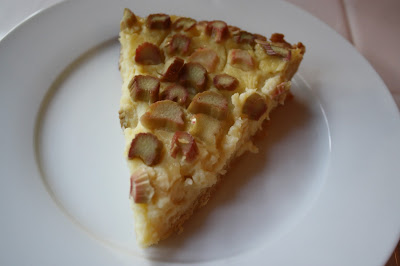 My grandmother always had rhubarb growing in her garden -it grows like a weed and I feel like I shouldn't have to pay for a weed at the store! Next summer I'm going to try to grow it in my backyard.

If I ever get around to planting a garden, that is definitely one of the things that'll be in it (along with purple carrots). I also read that whether the rhubarb is pink or not has more to do with how it's grown than the variety: https://beta.theglobeandmail.com/life/food-and-wine/from-winters-darkness-a-surprising-bounty/article23594327/?ref=http://www.theglobeandmail.com&