I decided to make bulgogi after seeing this post, but then I realized that I also had one from Bon Appétit that, based on the ingredients, looked more flavorful, so that’s what I went with. Bonus: there are instructions for using various types and cuts of meat, including chicken, which is helpful since I don’t know where to get the thinly sliced fondue beef that is more common in Quebec and called for in the first post. I used beef from a tri-tip steak that I sliced myself (pro-tip: put the meat in the freezer for 15 minutes or so right before slicing it – the task will be easier). Also, I don’t have gochugaru, and I don’t want things too spicy anyway, so I used 1 tsp. of regular ground Korean pepper. This was fantastic; I’ll be sure to make it again! The marinade is great, but it’s worth getting a good sear on the meat as well. Absolutely delicious!

I served this with rice with gomashio and green beans.

Combine pear, garlic, soy sauce, gochugaru, ginger, sugar, and sesame oil in a large resealable plastic bag or medium bowl. Using a sharp knife, slice meat into very thin strips (see note above). Add to marinade, seal bag, and squish everything around until the meat is coated. Let sit at room temperature 30 minutes, or chill up to 8 hours.

Heat 1 Tbsp. vegetable oil in a large skillet over medium-high until oil is shimmering. Remove half of meat from marinade, letting excess drip back into bag; season lightly with salt and cook in a single layer without moving until lightly browned, about 1 minute. Toss meat and continue to cook, tossing occasionally, until cooked through and crisp at edges, about 3 minutes. Transfer to a plate. Repeat with remaining 1 Tbsp. vegetable oil, remaining meat, and more salt. 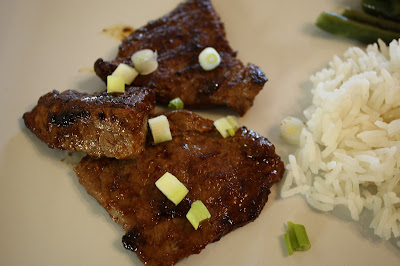