It’s been a while since I posted a dessert recipe, mainly because the ones I’ve made lately have been lackluster. I’ll list them, not because I think you care, but because these posts serve as a sort of record-keeping for me, so for my own reference, here’s what I tried. There were salted peanut butter chocolate chunk oat bars, which were supposed to be a breakfast item, but were so goram sweet that they were too much even for dessert. A coconut chocolate cake had much less sugar, but while the Engineer loved it and compared it to a macaroon in cake form, I only found it ho-hum at best. Then I made maple cake pops with maple cookies, marshmallow crème and white chocolate. Disaster! The consistency of the pops was all wrong and they fell apart when I tried to put them on sticks. So I made balls instead, but the recipe should have called for adding something like coconut milk to the melted white chocolate, because it was not at all the right consistency for dipping (and there wasn’t even enough of it to do the whole batch). Again, those pops were too sweet for my liking, which is saying a lot. Next time, I’ll make actual cake pops, not imitation cookie pops. (I’ll also have to figure something out for a cake pop stand, because it turns out that my strainer’s holes are too small the prop up the cake pop sticks. I used a cheese grater, but it was less than ideal and probably couldn’t hold much more than a dozen at a time. I’m open to ideas that don’t involve me buying a block of floral foam.)

So this brings us to this chocolate hazelnut cake. To tell you the truth, this one initially disappointed me too, but I now realize that it was my expectations of it that weren’t met. You see, the recipe called for cutting the cake into two layers. However, perhaps my cake was flatter than the original (the center did collapse, after all) or perhaps my hazelnuts weren’t ground finely enough, but this proved absolutely impossible. The cake crumbled apart when I tried it, so I aborted the mission. This means that I had to improvise: the vegan chocolate buttercream that was meant to be sandwiched between both layers ended up smeared on top of the cake, filling the crater in the center, and I poured the ganache directly on top of it, without having enough on the sides of the cake to even consider covering them in hazelnut meal. (Just for fun, you should check out the original recipe at the link to see how nice her cake looked!) My result wasn’t pretty; I found the crumb a bit gritty and uncooperative, and I would have needed more ganache to get better coverage. That being said, if I hadn’t seen what the cake was “supposed” to look like, I would have been more at peace with my version! And it was actually very good. I think if I make it again, I’ll make sure to process the hazelnuts a bit more, I’ll put the buttercream on top of the cake, and I’ll drizzle it with ganache (instead of evenly covering the whole thing with it). That’s what I’m recommending below, if you want to try this cake.

For the chocolate hazelnut cake
Preheat oven to 350 °F. Prepare an 8-inch round cake pan by spraying with non-stick cooking spray and lining bottom with parchment paper (I used a springform pan and recommend it).

In large mixing bowl, stir together milk, water and vinegar until curdled.

In small microwave-safe bowl, add chocolate chips and coconut oil. Microwave on medium-low for 30 seconds. Stir and microwave an additional 15 seconds. Stir until chocolate chips are completely melted. (I did this on a double boiler.) Add to milk mixture, along with sugar and vanilla. Blend well. Add flour mixture and stir until combined. Pour into prepared cake pan.

Bake cake for 32-35 minutes or until toothpick inserted in center comes out clean. Place cake on cooling rack for 10 minutes. Remove from pan and allow to cool completely.

For the chocolate buttercream
Beat together margarine and shortening for 1 minute in large bowl of standing mixer. Add powdered sugar, cocoa powder, 2 tablespoons creamer and vanilla. Add another tablespoon of coffee creamer if needed. Beat buttercream until light and fluffy.

Place cake on serving platter or cake stand. Top with buttercream. Place in refrigerator for 30 minutes.

For the chocolate ganache
Mix chocolate chips and creamer in small bowl. Place in microwave for 30 seconds on low, stir. Microwave for another 15 seconds. Whisk until chocolate chips are completely melted and ganache is smooth. (Again, a double boiler works well, too.) Pour ganache over the top of chilled cake. It sets fairly quickly, so if you want to use a spatula to smooth it out, do so immediately. Otherwise, you can drizzle it in a pattern of your choosing. 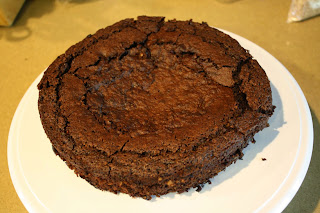 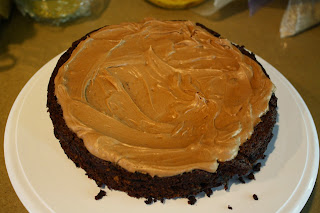 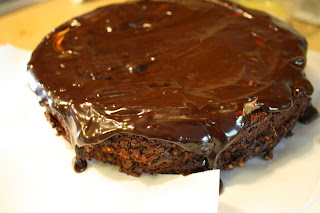 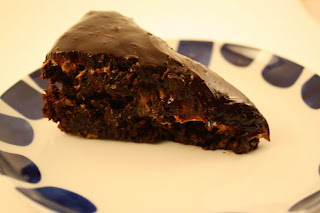 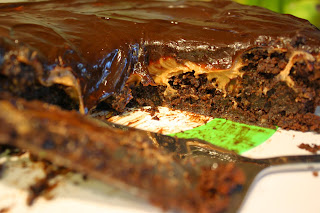 What about baking it in two pans?

Maybe next time... If I had 2 springform pans!