I know I haven’t updated in a while. I didn’t write anything about Earth Hour (we participated, though very few people on our street did) or April Fools’ Day. But I do have a backlog of recipes, so I’ll start with this Lemon-Coconut Loaf with Lemon-Coconut Glaze adapted from Noble Pig. I’ll point out right now that I was in a hurry when I made it and accidently mixed the coconut right in the glaze instead of sprinkling it on top. I looked at the result and decided I would have to modify the recipe so as to sprinkle it, but I realized that the recipe was fine already – it was my mistake. In all honesty, though, this loaf was good without glaze, too. If you’re making it lactose-free, replace the buttermilk with lactose-free milk to which you’ve added some lemon juice.

In a medium bowl, whisk together flour, baking powder and salt. Set aside.

In a small bowl, whisk eggs and buttermilk until evenly blended. 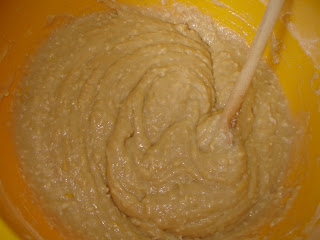 Pour batter into the pan and bake on center rack for 45 to 50 minutes, or until a toothpick inserted in the middle comes out clean.

When it comes out of the oven place pan on a cooling rack for about 15 minutes before removing the loaf from the pan.

While it's cooling, make the glaze.

For the glaze, combine confectioner's sugar, lemon juice, butter and lemon extract. Whisk to blend. The glaze should have the consistency of heavy cream. If needed, add more sugar to thicken it or more lemon juice to thin it.

When the bread has cooled, spoon the glaze evenly over the bread and immediately sprinkle the coconut over the top. 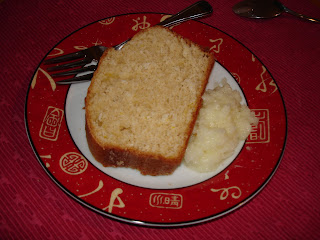