As you know, I now tend to use Banza pasta instead of the regular wheat kind, to limit carbs. I really like it, but I now realize that perhaps it’s not meant to be substituted in every recipe. For example, when I made this pasta with mushrooms and cashew cream, I think that the pasta water, despite being starchy, was not up to making a sauce as the recipe intended. However, Banza did work very well with this easy pasta e piselli dish, which is meant to be more of a soup than a saucy pasta. I made a meatless version that I really liked! But the Engineer found it bland, so perhaps I should have added salt or more cheese to compensate for the pancetta. Too bad I had doubled the recipe…
I used Banza’s orzo pasta, but to be honest, had I found regular ditalini, I would have used those instead. For substitutions, just use the same weight of another shape of small pasta. And don’t use parmesan instead of the pecorino romano here, it would not be the same!
2 Tbsp. olive oil, plus extra for drizzling
1 onion, finely chopped
2 ounces pancetta, finely chopped (I omitted it)
½ tsp. table salt
½ tsp. black pepper
2 ½ cups chicken broth (or vegetable broth; I used 2 cups)
2 ½ cups water (I used 2 cups)
7 ½ oz (1 ½ cups) ditalini
1 ½ cups frozen petite peas (I had closer to 1 cup)
1/3 cup minced fresh parsley
¼ cup grated pecorino romano cheese, plus extra for serving
2 Tbsp. minced fresh mint
Heat oil in a large saucepan over medium heat until shimmering. Add onion, pancetta, salt, and pepper and cook, stirring frequently, until onion is softened, 7 to 10 minutes.
Add broth and water and bring to a boil over high heat. Stir in pasta and cook, stirring frequently, until liquid returns to a boil. Reduce heat to maintain a simmer; cover, and cook until pasta is al dente, 8 to 10 minutes.
Stir in the peas and remove the saucepan from the heat. Stir in parsley, pecorino romano, and mint. Season with salt and pepper to taste. Serve, drizzling with extra oil (if desired – I omitted it) and passing pecorino romano separately. 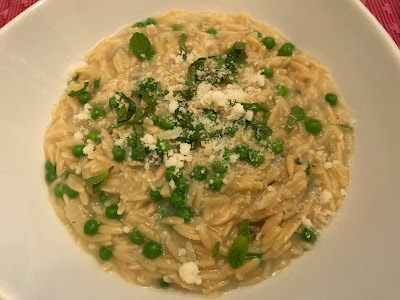