… and my shop is called Squee Knits.

I had been thinking for years that someday, when I had time, I would knit baby cardigans and sell them on Etsy, maybe even write a few patterns and sell those too. But about a year ago, I made something for the Fox that helped me so much, I decided to open an Etsy store now and sell it.

You see, when he as 8 or 9 months old, the Fox decided that whenever I would put him on the changing table, he would rapidly flip from his back onto his stomach and try to crawl away. Because it’s hilarious, don’tcha know. This made changing him near impossible – I would have needed three hands, so I had to go back and forth between pinning him down a bit and removing his dirty diaper and pinning him down and cleaning his butt and bringing him back and pinning him down and putting the clean diaper on. Some of you out there know what I mean. But I had, what, another two years of changing his diapers?

So I thought, “Okay, fine! I’ll cave and get a Hulabye – after all, that’s why I saved the link for so long, in case I needed it.” But it turns out I couldn’t find one anywhere: the website is closed, there were none second-hand on eBay, and I got no response after contacting the Facebook page, which hadn’t been updated in forever (I got a reply two weeks later, saying they don’t make the Hulabye anymore, but – spoiler alert – I had solved my problem by then). So I turned to Google to find something similar. And… there wasn’t anything. I mean, I saw the Hug’n’Hold, but it’s sold out. The baBsafe went nowhere on Indiegogo. I even looked at patents (like this, that, and the other), but as far as I can tell, none of these devices are being manufactured. The only restraint systems that ARE being sold wrap around the waist only, which would do nothing to prevent my baby from rolling over – he needed to be restrained at the shoulders. After all, changing pads already come with a waist strap. 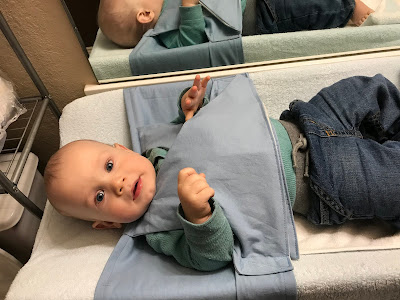 And so I decided to make my own. I came up with something suitable, sewed it, and used it. It was a game-changer, and it was really exactly what I been looking for. I also got a lot of positive feedback from people (like friends who saw this photo, or my parents who also changed the Fox’s diaper over that summer). So I decided to perfect the pattern (which took so much more work than I had thought, hence my absence here in the past weeks) and open a store on Etsy to sell it. It’s the only item in the store for now, but since I do plan on selling knits and knitting patterns eventually, I’m calling it Squee Knits.

To be clear, the idea for a restraint system for the changing table is not mine – a search through patents will reveal that dozens of people have thought of it before me for decades now. The idea for a vest, specifically, is not mine either. But THE PATTERN is mine, and as far as I can tell, nobody else is selling ready-made changing vests (if they were, I would have bought one myself!). So please share the link, and if you make one and like it, please leave me a review on Etsy! 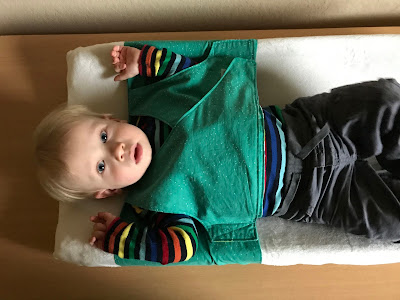