I’d been meaning to make this sweet potato crisp for a while, but never got around to it. Then I decided that it would make a good side (colorful vegetable!) to a chicken dish we were having, plus, the Little Prince would definitely like it if I omitted the alcohol (which I did, obviously). As I was reading the ingredients, I realized that it called for a bit of cream, which I can get lactose-free here, so that sealed the deal! (I don’t think the cream is essential, though, so you could use lactose-free milk instead or omit it entirely.) I halved the recipe, since I had no army to feed, used vegan margarine instead of butter, and made it in an 8”x8” dish. It was lovely! I really enjoyed the contrast of the crunchy top and creamy insides, along with the sweet and salty in this dish. The Engineer first said that he liked it, then upgraded his statement to say that he loved it! Note that if you wanted a thicker, more substantial crust, you could double the amounts of topping ingredients and still use the same dish.

First, start the sweet potatoes: Place the potatoes in a large pot, and add cold water to cover. Bring to a simmer and cook until very tender, about 20 minutes. Drain potatoes, return to the pot, and mash with the remaining potato ingredients. Purée in batches in a food processor until very smooth, and transfer to a 9”-square (or similar) baking pan. (I simply mashed the potatoes and didn’t use any blade action at all, so don’t worry if you don’t feel like taking out your food processor for this.) 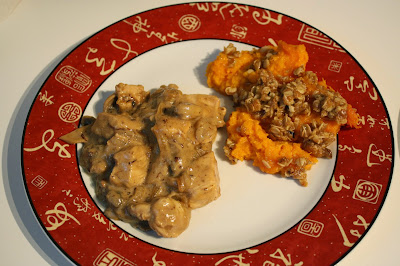 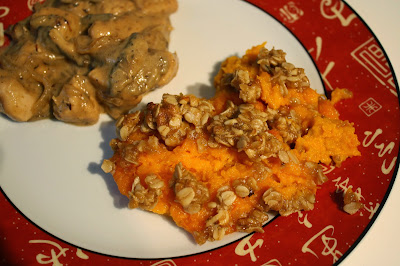 I am ordinarily skeptical of sweet potato in general because it seems like every time I try a new dish I have a random reaction to it. I simply cannot predict whether I will like a given sweet potato preparation or not! That said, this was definitely a "winning" SP dish for me - I would happily glop more of this stuff onto my plate.